The Fire Starter Festival 2017 drew to a close last month after 35 events which attracted around 1500 participants. Over the coming months we’ll reflect on the evaluations, and have many conversations about what went well, what could have been better, what inspired people, and what actions have been taken to light some small fires of change.  As the inspiration for the festival came from the Seven Steps for Lighting Small Fires of Change, I thought I would share seven things I now know about lighting fires and what it takes to light a Fire Starter Festival. 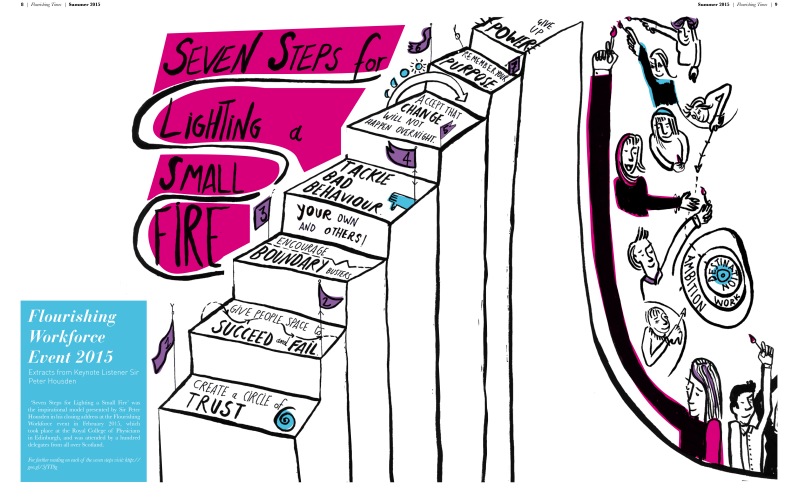 1 – You need to prepare the ground.

One of the outstanding features of the festival was the joining up of many networks that we either belonged to and or had contact with , who in turn joined up with other unknown networks  and contacts. In many ways what transpired was the power of weak ties, and a sense that in times of complexity you need to meet with people you didn’t know you needed to meet!

People in all parts of the system need freedom to try out ideas, feel supported, but also room to test out, iterate, fail without constant scrutiny. We heard a great example of this through the Scottish Fire and Rescue Service, where Paul  Blackwood in collaboration with other services in Glasgow developed a unique programme for young offenders in the Gorbals – Operation Modulus. Paul acknowledged that part of this success was because of the support and freedom afforded by Ali Hay, Chief Officer for The  Scottish Fire and Rescue Service, and the willingness of everyone involved to test out something new.

This room to breathe also applied to the Festival itself. By creating  a structure where we supported or curated events  (a bit like the Fringe Festival) we did not interfere with what people wanted to do, where they were going to hold it, and who they were targeting.  We helped to feed the flames by connecting people – putting them in touch with others who may have been able to help, and encouraging event hosts to look through the emerging list of events to see if they could connect in any way.  We didn’t have a big list of rules but trusted that everyone would create an event that either shared a small fire of change or focussed on a question that could be ignited.

Each event was unique, celebrating the imaginative and creative ways we engage with each other. Some events were just the beginnings of conversations, ‘works in progress’ while others were platforms to share innovative approaches that had changed services and communities. In itself it was good to celebrate the emerging culture of innovation and feel proud of our small fires of change.

Edinburgh Soup created and hosted an event with live music and a number of community projects pitching for the event admission donations. They offered a Burns Souper, offering donations of haggis, soup, bread, whisky, and cake! The community groups all had the opportunity to tell their story – why they had created such diverse services and why they needed further funding.  It was a fantastic event, full of energy, commitment and a reminder that lots of individuals and communities are making a real difference to people’s lives in Scotland.

Stories, like those we tell around the campfire, are the things that really resonate with people, giving them energy for change. Without doubt what people appreciated most were the many, many personal stories of how people had created a change for themselves, their work, or their community (and usually all three). We are encouraging people to write blogs and share their experiences. Please get in touch if you have something to share.

5 – Risk and danger are essential components of fire

Approach with curiosity rather an extinguisher. Some events felt very risky to the organisers, and there were times when the risk of discussing the issues that mattered felt personally risky (will I lose my job) but also risky for organisations – will I be making my organisation vulnerable to external criticism, will I be seen as being involved in something frivolous? To some extent this was apparent in the co-created event on how different elements of the ‘system’  experienced performance measures. It was acknowledged that journalists (media) have a huge impact on performance measures and it would be beneficial to have a journalist present as part of the discussion of this ‘fishbowl’ event.

At times this felt too risky with lots of “what if?” questions emerging. What if the journalist misquoted, what if they wrote about the event in six months time without a sense of context? However, the huge benefit from collaborative work is that risk is shared and a sense of courage comes from a group working closely together. The event included a tenant, ex MSP, and representatives from Audit Scotland, NHS, Government and voluntary sector all sharing their diverse perspectives on ‘what matters to me’ in relation to performance measures.

6 – Fire is a rich metaphor 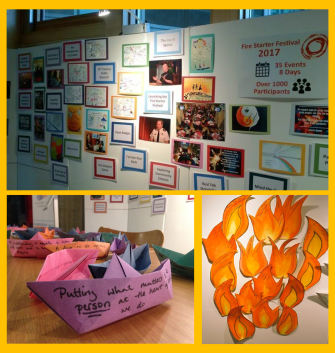 It captured people’s imagination and creativity, and gave a permission to do something different, test out an idea and be creative. People developed their own amazing imagery and the puns spread like wild fire (so sorry – couldn’t help myself). We were fortunate to be able to create an exhibition of some of the stories and imagery from the festival for the Scottish Parliament. Without a doubt it stopped MSPs in their tracks – keen to know what people wanted to burn (fortunately no-one mentioned the Parliament) and what they wanted to ignite or spark in public services.

7 – Fires need to be sustained.

Lighting a fire is relatively easy, it’s keeping it going that can be a bit trickier. Leadership is important in organisations, so that those small fires aren’t extinguished but so are opportunities to support each other and make connections – through established networks and loose ties to make things happen. We know that lots of people have been inspired by the stories they heard and want to create change but are tentative about the next step.  How can we help?

Our offer in collaboration with all you systems shakers and mischief makers:

This site uses Akismet to reduce spam. Learn how your comment data is processed.